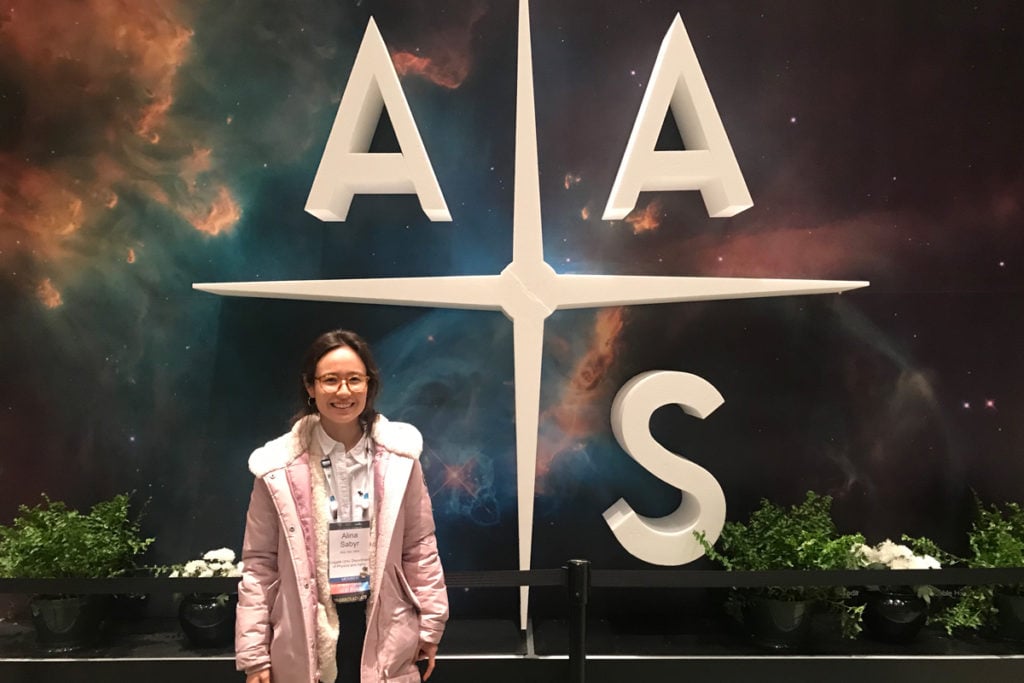 Let the evidence show, Alina Sabyr is someone who embraces adventure. At 13, she chose boarding school at HPA in order to “see the world” and improve her English, rather than remain in her native Kazakhstan for high school. With HPA as a launch pad for real-world research, she attended Colgate University where she majored in astronomy and physics—with summer research at Berkeley and study abroad in Australia. Now, Colgate degree in hand, Sabyr is poised for a year of international study made possible by the Thomas J. Watson Foundation. She plans to explore how different cultures keep skywatching alive in the 21st century.

“You could say that in our modern lives we’re a bit removed, because most of us don’t use the night sky for navigation or agriculture,” she says. “But the stars still hold great emotional power. And many people care deeply about sky-related issues, such as astronomical research or establishing dark sky reserves. I’m excited to hear many different perspectives—from astronomers, cultural astronomy scholars, amateur astronomy clubs—and to better understand both the cultural histories and current-day issues.”

Sabyr’s first stop will be New Zealand, where she plans to meet with Māori astronomy scholars and also to stay at the Aoraki Mackenzie Dark Sky Reserve. She also chose Greece and Mexico for their rich astronomical history. For interested followers, she’s keeping a blog about her work: watson.alinasabyr.com—check in out!

The whole focus of the Energy Lab is to encourage you to come up with your own idea, and then provide support for you to do just that. It’s a huge privilege.

Looking back on her high school career, Sabyr says she’s grateful for how HPA provided an “eye-opening” number of academic and co-curricular options. She played tennis and tried cross-country; performed in a musical; and discovered a love for art history, in addition to sustaining her ongoing interest in math and science. “I wanted to keep my academic options open,” she explains, “and every class helped me build different skills. I wanted to explore so that I would be certain of my interests once I got to college.”

AP physics class with Jerry Bleckel sparked her early interest in fundamental physics, while a visit with Mr. Bleckel to the Keck Observatory brought about curiosity in astronomy. At the Energy Lab, Sabyr chose to pursue an independent project in neuroscience, rather than physics. “The human brain is fascinating to learn about. I figured, why not try it, if we have all these amazing devices,” she recalls. “The whole focus of the Energy Lab is to encourage you to come up with your own idea, and then provide support for you to do just that. It’s a huge privilege.”

After the Watson Fellowship, Sabyr will be headed to a Ph.D. program in astrophysics. “I’m not exactly sure where I will specialize,” she says, “but thankfully American graduate schools allow you time to try out a few different projects.”

In typical fashion, Alina Sabyr is keeping her options open.