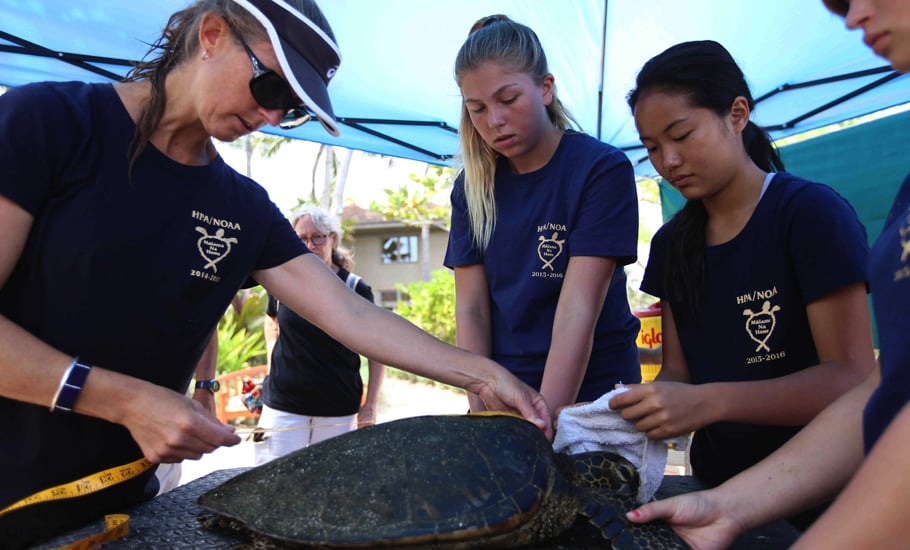 Laura Jim ’91 is no stranger to HPA. She grew up in Waimea, snorkeling and diving on the same reefs she explores now with her students. After earning a B.S. in biology at the University of Oregon, she joined the Peace Corps and served as a fish farming extension agent in the Democratic Republic of Congo, and then in the Federated State of Micronesia, where she established three open ocean sponge farms with village farmers. Since 2000, she has taught middle school science at HPA, where she is also a boarding faculty member, scuba instructor, and associate director of the Sea Turtle Research Program.

You’re a child of Waimea! Do you have a favorite place on the island?
Currently, my favorite place is at Puako, located at a 60-foot depth. It has a drop off on three sides and houses the blacklip butterflyfish, Chaetodon kleinii. I don’t typically see these butterflyfish anywhere else! I always find something neat in this spot, and I just love the serenity.

Your courses are closely tied to sustainability and ocean health. What inspired your passion for ocean conservation?
I traveled to Palau in the late ’90s, and I had not yet heard of coral bleaching. When we arrived, I learned that Palau had just gone through a major bleaching event where all the table corals died, along with a unique soft coral. I can still remember the impact it had on me seeing all the dead table coral on this beautiful Indo-Pacific reef. Then in 2015, I remember arriving with my coral reef capstone students for a snorkel at a site I regularly visit here on the Kohala coast. We observed colony after colony of bleaching coral. Our coral has never been the same since this event. It was a call-to-action for me to serve our oceans. I challenge my capstone students every year to do their part.

Are there any current initiatives, either in Hawai‘i or elsewhere, that give you hope for the future?
I believe the Sustainable Hawai‘i Initiative is the most progressive action currently here in Hawai‘i. If, in fact, we can protect 30 percent of priority watersheds, effectively manage 30 percent of nearshore ocean waters, achieve 100 percent renewable electricity, and implement an interagency biosecurity plan while doubling local food protection by 2030, we will be making a positive move towards more climate balance.

Can you tell us about some of the work that’s happening now with the Sea Turtle Research Program?
I’m super excited about the work we are currently doing! We are in the third year of a project in Vanuatu working with locals of Moso Island and with Francis Hickey, coordinator of Vanuatu National Museum and Cultural Center’s Traditional Resource Management Program. There are several sea turtle nesting beaches in the Republic of Vanuatu, but the overall population of turtles has been declining for many years. The purpose of this project is to identify the foraging habitats of nesting sea turtles through satellite tagging of the nesting hawksbill (Eretmochelys imbricata) and green turtles (Chelonia mydas) to track their migration back to their foraging grounds. This knowledge will address population declines that result from human interactions in foreign foraging areas as well as during the nesting season in Vanuatu. We currently have four turtles tracked with two headed to New Caledonia for foraging and two to areas in Australia. Super interesting stuff!

We are also working with a NOAA Fisheries biologist on identifying current sex ratios of our near shore sea turtle population. A rise in global temperatures poses a potential threat to “normal” sex ratios, leading towards feminization of the population. Students in Johanna Anton’s capstone biotechnology course will be supporting this effort.

In addition to being an HPA alum yourself, you are also the parent of two alums! How do you think HPA shaped the path for your children?
I am so grateful to have had my children, both 13-year students, shaped and molded by the school, its teachers, coaches, staff, and fellow students. Our family puts great stock in character and in being a person of honor and integrity, and I feel that character education is a genuine feature of HPA’s culture. In addition, my children had the benefit of growing up in an international community, with students from across the globe. And the academic experience provided by HPA’s diverse faculty is exceptional; each and every teacher challenged my children to question, to communicate, and to find clarity in the world.