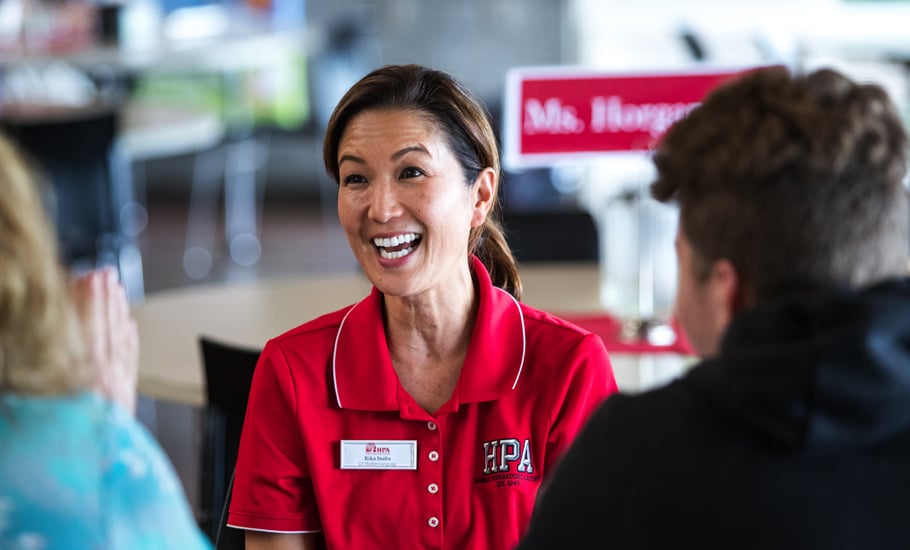 Rika Inaba grew up in Japan, mostly in Tokyo. She came to the U.S. at eighteen to attend the University of Hawai‘i at Manoa, planning to do the English language program initially, but ended up staying and completing her bachelor’s degree there. Probably because of the presence of Japanese culture on O‘ahu, she never felt homesick and stayed in Hawai‘i after graduating. Then, thinking about finding a good place to raise a family, she and her husband moved to Hawai‘i Island in 2006. Inaba Sensei started at HPA in 2011 as a Japanese language teacher and has been the head of the modern languages department for the past five years.

Do you consider yourself a traveler? What other countries have you visited? Where would you like to go next?
Yes, definitely! I go back to Japan every year to visit my mother and bring my son, so they know each other. While in college, I traveled to Singapore, London, and Paris, and for business, traveled to Japan. This past summer, I was in Australia with my son, who was in the Rubik’s Cube World Championship. I’d love to visit parts of Asia I’ve never been, especially in Indonesia and Thailand.

Do you have a favorite work of literature in any of the other languages you speak, and if so, what do you enjoy about it?
I enjoy reading about teaching. On my nightstand, I have a memoir written by Masanobu Takahama, a man who opened a school for students who struggled in the Japanese system, and I’m really interested in his philosophy of education. I’m also a fan of Nagiko Umino, a Japanese writer who teaches Japanese to international students; she’s written a very funny series about her interactions and observations of teaching adult language learners.

Have you been a part of any of the OurWorld trips, and if so, how did that benefit your students or connect to your teaching?
Yes! In fact, the trip to Japan that I started five years ago was the pilot for this program. Working with PAAC (Pacific and Asian Affairs Council), I organized a trip that included cultural and educational experiences, including home-stays with Japanese families, as well as visiting Hiroshima Peace Memorial Park and speaking to survivors. This is now a school exchange; our students visit Japan in March, and students from this school in Hiroshima visit HPA in October. (Actually, their entire school goes to O‘ahu, but we host a small group who are interested in STEM). Our Japanese language students take an active part in hosting.

From your perspective as a teacher of language and culture, what do international boarding students gain from their HPA experience?
International students benefit in so many ways, but I think the lifelong cross-cultural friendships they develop are so valuable. For example, I just had a couple of alumni from the class of 2015 visit, one of whom is from Japan and the other from Waimea. They told me about how they’re starting an art gallery together in Japan! At HPA, students have such a great opportunity to meet and break down any boundaries; they really do become like family. Sitting in the dining hall together, they can discuss big global issues and respect each other. World peace really does start here.