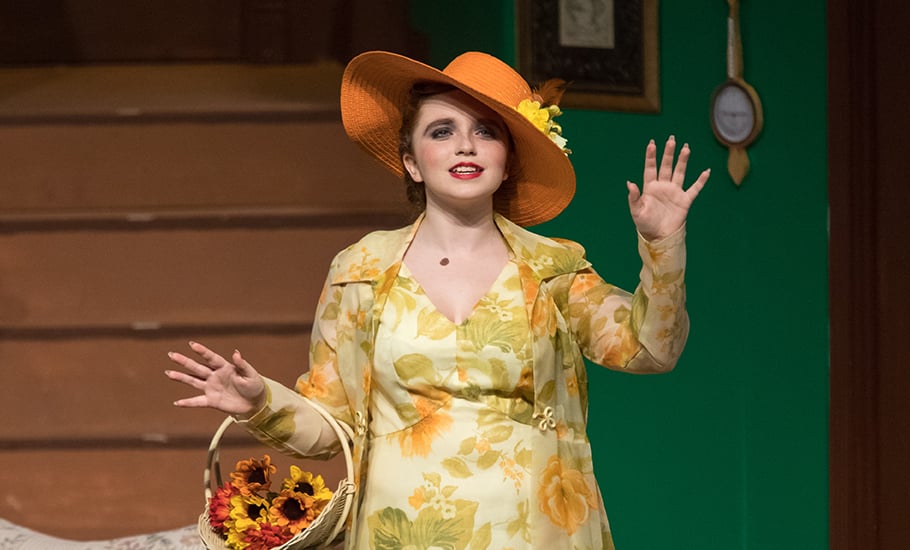 Violet Stevenson has lived in Waimea all her life and attended the local schools through eighth grade. If pressed, she’ll name English and Spanish as her favorite subjects, but she’s involved all across campus, from the Youth and Government Club to the GSA to Big Brothers Big Sisters. Her major love these days is theatre and the Gates Performing Arts Center, where she’s flourished both behind the scenes, as a stage manager, and in front of the audience.

In your opinion, what does it take to be a truly great stage manager?
I believe that the best stage managers are people who easily adapt to difficult situations. From rehearsals to performances, unpredictability is a major factor in everything you do, no matter your role. Being able to keep a cool head and positive demeanor helps everyone else stay calm and provides better opportunities for a good idea to emerge.

In addition to stage management, you’ve taken on a big acting role, correct?
Yes! I played one of the leads in Hay Fever, Judith Bliss, who’s the retired actress and mother of Simon and Sorel Bliss. I really enjoyed being on stage. This was one of my first major roles, and I had a lot of fun up front. I don’t think I’ll be graduating to musicals, because there’s something about singing and dancing that feels different to me, but I do plan on auditioning for future plays!

Are there any similarities between the two?
Oh, it’s very different. When acting, I was a lot more focused on my role, rather than the entirety of the show. Memorizing lines and blocking proved to be challenges in their own right, as well as the new stress of actually performing in front of an audience. I truly enjoyed both, though, and feel extremely lucky to have experienced all the different aspects of what makes a show so very magical.

What does it feel like to be part of a theater “family”?
I couldn’t ask for a better group of people to work with. The casts and crews change with every show, but that never prevents people from cooperating and putting hard work into their roles. Everyone is always kind and positive throughout the entire process, and Mr. Terpak especially knows how to make the show fun for those of us backstage or in the booth.

Do you have any advice for new students who might be thinking about getting involved at GPAC?
Don’t be afraid to hang out with the theater nerds, we’re fun! Seriously though, for people who are interested in acting, just remember during auditions that everyone is doing the same embarrassing things you are, so relax and enjoy yourself. And if you are considering a more behind the scenes role—do it! The more people on hand, the more opportunities to do what you’re good at when it comes to prop-making and other work with Mr. Terpak. Mr. Terpak wants you to enjoy your time and is just a cool guy in general!